The number of people reading manga has skyrocketed over the years as a result of the large viewership that anime garners worldwide.

Are you a fan of manga, too? Now, are you looking for the best websites to read manga free online?

If so, you’ve landed in the right place. Geeks Nation will now provide you with a list of the top manga websites for free (and paying fee) manga reading; keep reading to find out. 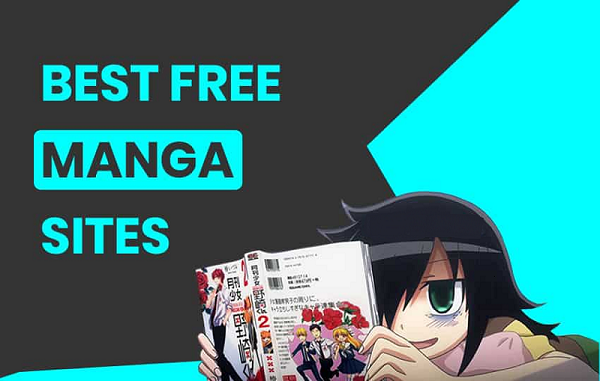 This is a big free site for manga in Japan, and of course, readers can change the language to English at any time in order to make the reading experience easier.

Another important feature of this manga site is that it lets readers go through a wide range of manga series, from comedy to action-packed titles.

More interestingly, readers can actually use Comic Walker’s service without signing up. Registering for an account on the site will add several cool features, such as getting notifications for new issues published and creating a library of favorites. Thanks to great features, it’s no surprise that comic-walker.com is one of the best websites to read manga free online.

Notable titles that can be found on the site are High School DxD, Neon Genesis Evangelion, Mobile Suit Gundam: The Origin, etc.

When it comes to the very best websites to read manga, Crunchyroll.com is always a great choice.

Well-known as an authority in the anime industry, Crunchyroll also has a significant influence on the manga community.

New manga titles are uploaded right away to the site as soon as they are announced in Japan. Readers can find a variety of manga on Crunchyroll from well-known publishers including Kodansha, Seven Seas Entertainment, and more.

Popular manga series like Naruto, Attack on Titan, and Fairytail, as well as less popular ones, are all available on the site. For $7.99 a month, you can subscribe to Crunchyroll Premium and have access to every manga and anime on the site.

That’s quite pricey. But the site also offers a 14-day free trial that lets us read manga for free before we have to pay for Crunchroll's service. 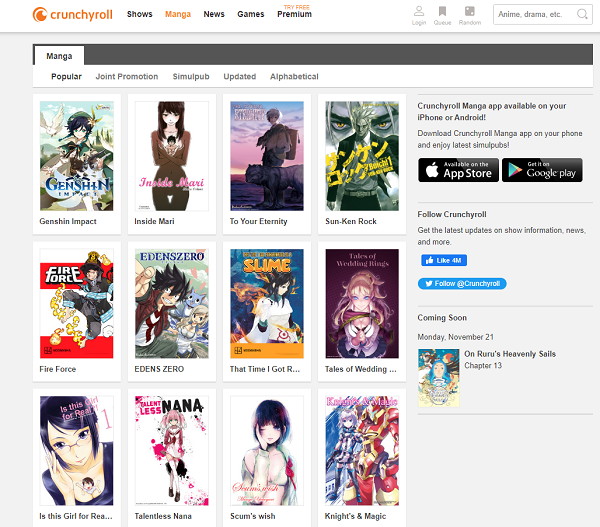 Do you know that Weekly Shonen Jump is one of the oldest weekly manga magazines available out there?

And with Shonen Jump's digital version, readers can get access to 3 chapters of all ongoing series for totally free. Depending on the series, you may be able to read the manga’s first three chapters or the three most recently released chapters. And you'll need a Shonen Jump subscription to continue reading after that.

For $1.99 per month, users can unlock more than 10,000 chapters across a wide range of titles in Shonen Jump. 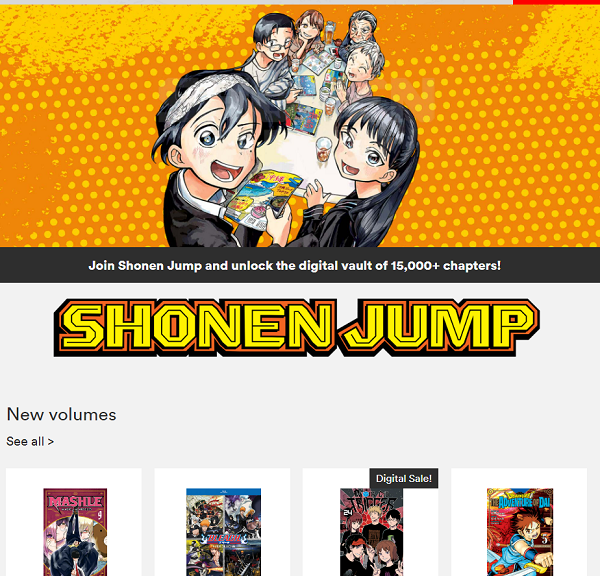 Manga Plus at mangaplus.shueisha.co.jp is a manga site owned by Shueisha - a quite famous Japanese publishing company.

Actually, Manga Plus is one of the very best websites to read manga free online with titles from Shonen Jump and North American manga.

Manga Plus has a nice, easy-to-use interface, so you won't have any trouble finding manga and using the site on your first try.

Manga Plus's most amazing feature is that, despite the lack of ads and site errors and glitches, the site is absolutely free for fans to use.

Run by Kadokawa, BookWalker (global.bookwalker.jp) is a big online bookstore for official comics from Japan, including titles from all popular publishers like Kodansha, Yen, Vix, etc.

The site also features free manga titles each month, but compared to the paid content, the free content available on BookWalker is much less. Notable titles that can be found here: No Game No Life, Attack on Titan, Re:ZERO: Starting Life in Another World, and more. 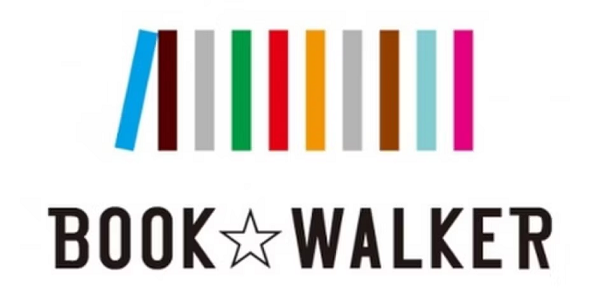 The next best websites to read manga free online is Manga Club.

It is another legal site for reading manga with vastly different genres. All the content on the site is officially licensed. Well, it seems okay to say that getting the manga to read on Manga Club is free, considering the rental process this site uses.

On Manga.club, you can read some chapters for free, but to buy a full copy of a manga, you have to sign up on the site.

After the registration, you can get tickets that then can be used to rent for free for up to 72 hours. It’s possible to access the site on any device.

Viz Media is a major publisher of popular manga series, and lots of manga fans know about the site. The Viz manga site has a huge list of titles, with more than 4000 titles. Some of Shonen Jump’s popular manga are also available on the site, which shows how popular the platform is.

Notably, Viz Media (viz.com) provides selected manga chapters for free and previews of new releases, giving readers a sense of the story's content. You can read almost everything on the Viz manga site, from recent releases to classics and best manga to read like Naruto, One-Punch Man, and One Piece.

Tapas features Korean-based comics, called manhwa, which is considered a sub-genre of the manga franchise. Besides, Tapas also offers lots of webnovels to check out. The site lets readers check novels and manhwas up to a particular point, usually the sixth chapter.

Once going through all the free chapters, readers can use inks, coins, points, and free episode tickets to access additional episodes. There are, however, series under the "Premium" umbrella that you must purchase.

On the site, readers can enjoy reading manhwa in various genres, including action, adventure, reincarnation, comedy, and more. The Beginning After The End, Bastard, and Second Life Ranker are among the classic stories you can check out here.

It’s a free manga website. If you are looking for best websites to read manga free online, then Bato is really worth considering.

The site relies on fans and users to upload the content. Readers can find a very wide range of manga comics on Bato.to, including romance, action, sports, adventure, sci-fi, and many other genres.

This website also includes manga groups and forums. And if you can't remember the name of your manga and are having trouble finding it, ask other users in the discussion forum for help.

RELATED: Best Apps To Read Manga For IOS And Android

Here are some more excellent websites where you can read manga online for free or for a fee.

Owned by Amazon, Comixology is a perfect library of everything related to comics.

Amazon integrated ComiXology into the Kindle earlier this year. So, if you already have an Amazon account, you can read and purchase from Comixology's huge manga library.

You can read the first chapter of a favorite manga for free on Coolmic. Using four to seven tickets, you can access other chapters.

This is one of the most famous sites for manhwa-based stories. Readers can find super popular reads like unOrdinary, Tower of God, The God of High School, and many others at Webtoons.com.

That's the list of some of the best websites to read manga free online (or for a fee) that Geeks Nation has compiled and would love to share with you via this post. Do you find any sites that you want to visit right away to read your favorite manga? Please let us know in the comment section down below.