How to force quit on a Mac

There are times when an application on your Mac is not responding and you have to suffer from a frozen Mac. All you can do is wait until your screen unfreezes. But you don't know how long that will take. You can fix this issue by forcing quit that application. Here's how to force quit on a Mac.

Before you force quit a Mac

Force quit is a feature that shuts down an app that isn't responding. But before you use force quit, you should know that if your work isn't saved and you force quit a frozen program like Microsoft Word or a web browser, you may lose it.

You shouldn't use force quit on your Mac unless you have no other choice. It can cause you to lose work you haven't saved in open documents and could even mess up your operating system files.

Force-shutting down your Mac during a software update is a bad idea because your Mac might only have half of its operating system installed.

If you can, try to shut down your Mac normally by clicking Shut Down from the menu bar after opening the Apple menu. This is much safer, but your Mac might take a long time to shut down if it needs to finish updates or close apps first.

How to force quit on Mac from the Apple menu

1. Figure out which app isn't working.

2. Once you've found the app that's not working, look for the taskbar at the top of the screen. Click on the Apple logo in the far left corner to open the dropdown menu. 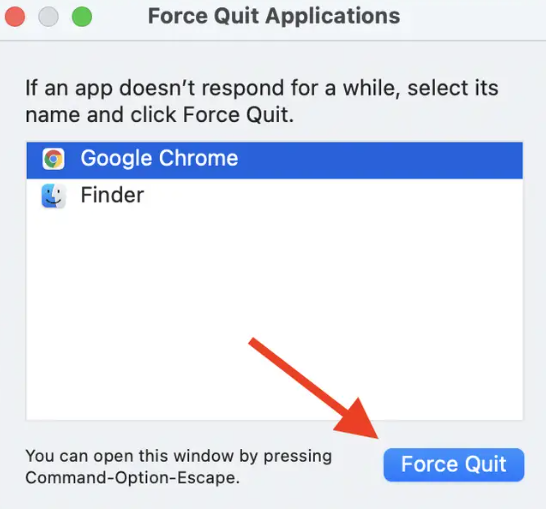 Any changes you make that aren't saved will not be saved. 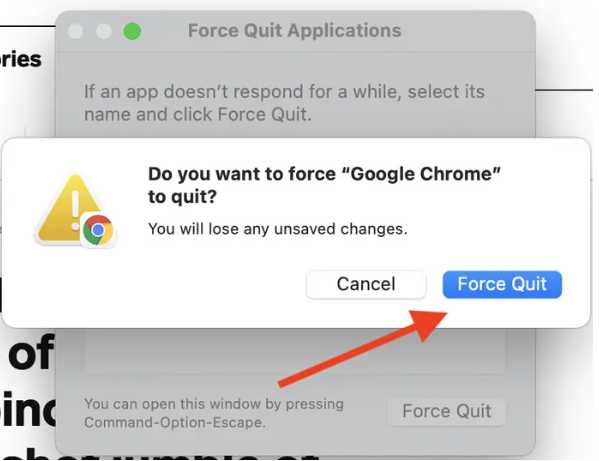 How to force quit on Mac using a keyboard shortcut

If you can't find the Apple icon in the taskbar, press Option + Command + Esc on your keyboard and then follow the steps above.

How to force quit on Mac using Activity Monitor

The Activity Monitor on a Mac makes it easy to find applications that are causing problems.

2. Once Activity Monitor is open, find the app you want to close immediately and click on it.

3. After you choose the app, click the "stop" button (resembling an octagon with an "X" in the middle).

4. A window will pop up and ask if you're sure you want to stop this process. From the list of options, choose Force Quit.

RELATED: How to uninstall an app on Mac.

What to do if you can't force the app to quit

If you can't force the app to quit, try restarting your Mac by clicking the Apple menu > Restart.

If you can't restart your Mac because it's not responding, you can force it to shut down:

After that, turn your Mac back on.

What to do if your Mac won't turn on again

Most of the time, if you force your Mac to shut down or restart, it will start up normally again. Any apps that weren't working should now work fine, so you can keep working on your important projects.

Still, if a problem caused your Mac to freeze in the first place, it might not start up again. Possible problems include old software and hard drives that don't work right. You can fix a lot of these problems on your own, which is good news.