How to Play 8 Ball Pool on iMessage

Almost everyone enjoys playing 8-ball pool because it is a fun game that requires accuracy, precision, and a bit of strategy to defeat your opponent. There are currently many games available in the iMessage store, but nothing beats the classics.

As the name suggests, 8 Ball Pool game is played with eight balls that are divided into two groups: stripes and solids. Whoever pockets the first ball must remain with that group for the remainder of the game and pocket all the balls before their opponent.

In addition, if you strike your opponent's ball directly with the cue ball, it is considered a foul and your opponent may place the ball anywhere on the table. The winner is the first player to pocket all of their balls. Here's everything you need to know about how to play 8 Ball Pool with friends on iMessage on the iPhone and iPad.

How to Play 8 Ball Pool on iMessage

1. Download and install 8 Ball Pool on the App Store

To play this game, you must download and install the GamePigeon app through the Apple App Store. This app contains a collection of games including 8 Ball Pool, card games, archery, and many more. 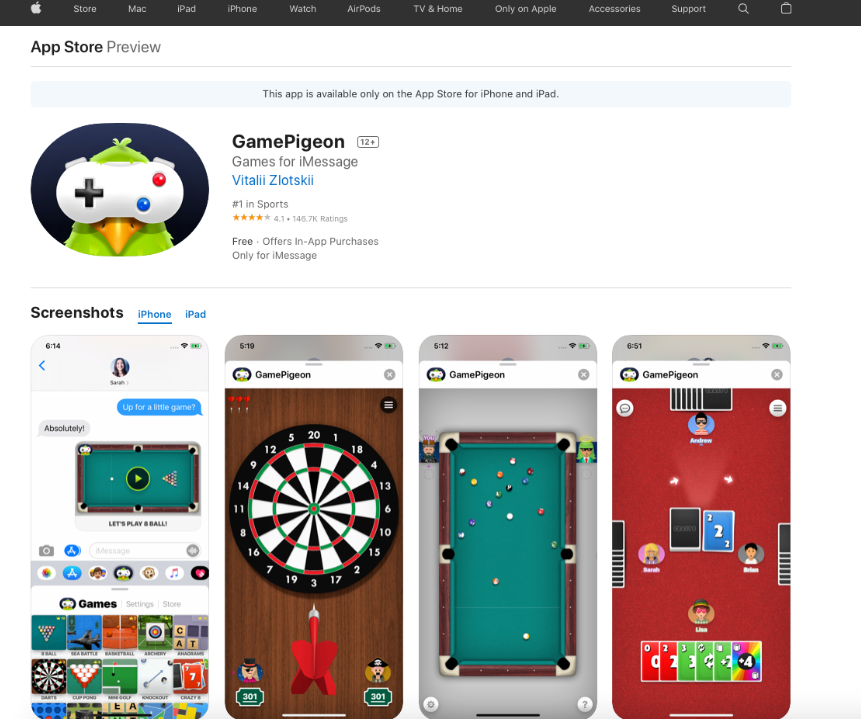 Open the App Store on your device.

Tap on the Search icon at the bottom right corner.

Tap on the Get button located next to the Gamepigeon tile.

Note: If 'GamePigeon' has already been downloaded on your account, the 'Get' button will be replaced by a cloud with a downward arrow.

Once the 'GamePigeon' app has been installed on an iOS device, it is time to play a game with a loved one.

1. Launch the Message app from the home screen of your iOS device to accomplish this.

2. Then, tap the conversation head of the individual with whom you wish to play the game. If not, click the Compose button in the upper-right corner of the Messages application.

3. Once in the conversation view, locate the app bar at the top of your keyboard and slide it to the left. Then, tap the GamePigeon icon to display the game list.

4. Next, select the 8 Ball option from the grid displayed on the screen by tapping on it. 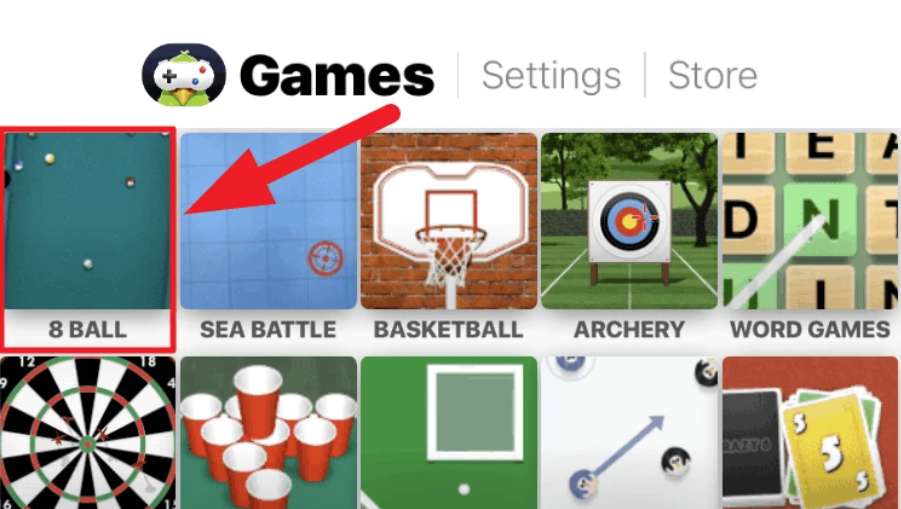 5. Now, select the game mode by tapping one of the options listed under "GAME MODE." The '8 Ball' option is the standard game mode, while the '8 Ball+' option simply doubles the number of balls for a longer play time.

Tap the CUSTOMIZE tile next to the 'GAME MODE' section to customize your cue stick. However, nearly all of the features are locked behind in-app purchases.

Then, if desired, type a message and tap the "Send" button to invite a contact to a game of "8 Ball Pool."

Since you sent the invitation, the other party has the right of first refusal. Tap the YOUR MOVE tile once your opponent's turn has concluded. 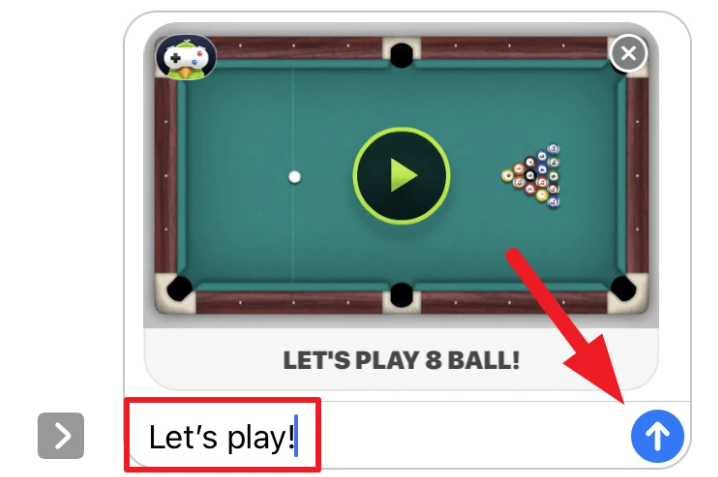 Now, drag your finger horizontally across the display to align the path of the cue ball with the target ball. Tap the cue ball icon that appears on the right side of the pool table. This will overlay the image of the cue ball on your screen.

Then, tap the cue ball to adjust the striking position of the cue on the ball, as indicated by the red dot. This allows you to have greater control over your cue ball after striking it. Tap anywhere on the screen to dismiss.

Then, locate the cue stick icon located on the pool table's left side. Next, tap-hold and drag your finger downwards to adjust the shot's power, and then release the stick when the desired shot power has been reached.

Once one of the players has pocketed a ball, the other player will receive their own set of balls to pocket. Your group type will be displayed beneath your avatar.

If you aim for an opponent's ball, you'll see a cross, indicating that it is not yours to pocket.

If your opponent commits a foul during their turn by striking your group of balls or pocketing the cue ball, you receive possession of the cue ball, allowing you to decide where to place it on your next turn.

In addition, if a player even indirectly pockets the '8' (black) ball during the game, they immediately lose and the other player wins.

The winner is the player who collects their group balls the quickest.

How to Control Sound and Music Playback in 8 Ball Pool

However, if you are in a social setting without earphones, the people around you would appreciate it if you turned down the volume of the noise coming from your phone.

1. Click the gear icon in the lower-left corner of the 8 Ball Pool game screen.

3. Using the customization options located directly above the Sound and Music controls, you can also modify your character's appearance, including facial expressions, hairstyles, headwear, and eyewear, among other things.

You can play 8 Ball Pool by downloading GamePigeon app on the App store. It won't cost you anything. And that's how to play 8 Ball Pool with your friends on iMessage. If you have any trouble playing the game, just leave a comment below and we will help you solve it.