Twitter is one of the most popular social networking services that enables users to send and read short 140-character messages called "tweets". Twitter Inc. is based in San Francisco and has more than 35 offices around the world. In 2013, Twitter was one of the ten most-visited websites on the Internet according to Alexa. While Twitter can be accessed and used on multiple platforms such as the web interface, SMS or mobile device app, 82% of its users tweet from their mobile phone through the app.

Twitter was launched on July 15, 2006 (www.twitter.com) by Jack Dorsey, Evan Williams, Biz Stone, and Noah Glass. Since then, the service rapidly gains popularity worldwide with over 313 million monthly active users as of June 2016. 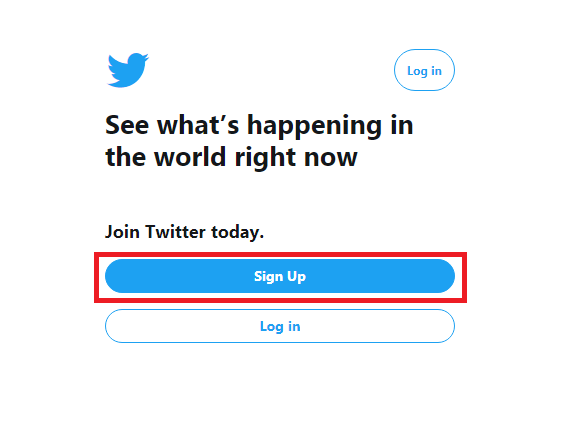 Step 3: Enter your full name and your phone number. 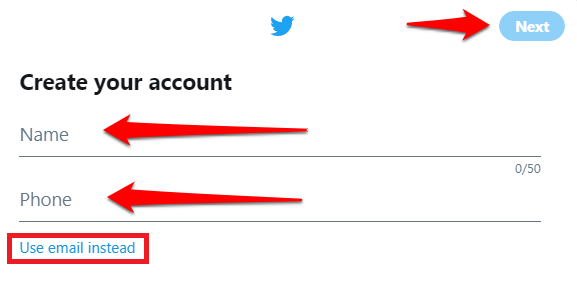 Step 8: Your account has been created but it is locked until you verify it. You need to confirm your email or mobile phone number.

Step 2: Enter your email address or phone number that you used to sign up for your account.

Twitter has been described as the "SMS of the Internet" because the way people exchange "tweets" is similar to exchanging text messages. A tweet, which is a 140-character message, is how users interacting on Twitter. According to founders Biz Stone and Jack Dorsey, there are 2 reasons for the 140-character limit. Tracing to when Twitter was launched, mobile Internet connections were rare and expensive, users mostly send and receive tweets as SMS text messages, which was limited to 160 characters before they split into multiple messages. That is why the content of an individual tweet is limited to 140 characters, with 20 characters left for the user's name so one tweet can be contained within a single text message. Dorsey also says that the 140-character limit forces people to be creative in their writing so that their tweets can be as concise as possible. All tweets are visible to everyone by default, you can search for tweets even if you are not a user, but senders can restrict message delivery to just their follower. Users can tweet via the Twitter website, via applications on mobile devices or via text messages (SMS).

Users may subscribe to other users' tweets - known as "following", and the subscriber is a "follower". The default settings for Twitter are public, this means anyone can follow anyone. As a social network, Twitter revolves around the principle of followers, when you choose to follow another user, that user's tweets will appear on your main Twitter page, known as the Home timeline. Tweets can be forwarded by other users to re-post or share on their own feed for their followers, this is called "retweet". Users can also "like" (formerly "favorite") and "reply" to individual tweets.

A single tweet may contain text, external links, username, and hashtags. A Twitter hashtag - a word or phrase prefixed by a "#" symbol - can be used to group posts together by topic or type. Similarly, the symbol "@" followed by a username is used to "mention" and "reply" to others' tweets. On May 24, 2016, Twitter announced that media such as photos and videos are no longer counted under the 140-character limit. Attachments and links will also no longer be part of the character limit.

A word, phrase, or topic, including hashtag that is mentioned at a greater rate than others, can be considered a "trending topics". Trending topics become popular either through a concerted effort by users or because of an event that prompts people to talk about a specific topic. Trending topics will help Twitter users keep up with what is happening in the world and what the public opinions are. By default, Twitter will show trends that are tailored for you based on your location and who you follow, which can be seen on the left of the Home page, but users can change the settings to show local trends.

After signing in, users will be redirected to the Home timeline, which is their main Twitter page. This place displays tweets of users that they followed in a reverse chronological order. If you have not logged in for a while, Twitter will show you some tweets that you probably haven't seen, such as a recap of what has been happening while you are away.

From the above interface image, users can see their profile and trending topics displayed on the left, the timeline is in the middle. To the right is Twitter's suggestions of accounts to follow based on the people you are following.

Notification and Messages are in the top left of the Home timeline. You will be notified when someone replies to your tweet or mentions you in one of their tweets. All of your replied tweets and mentions can be found in the Notification tab. Users can also use the Messages tab to send direct messages to other users, which can be understand as private tweets and can only be seen by the receiver.

Twitter is available for iOS, Android, Windows 10, Blackberry, and Nokia S40 with over 40 languages supported.